Come On In & Take A Tour

not your
typical
hotel room.

Experience the beautiful view of Missouri’s rivers from the lookout of your own ship, perched right over the Mississippi in Saint Charles.

glampin'
on a river.

Enjoy the “Gilligan” life on the edge of the Mississippi river in St. Charles in a two-person bed-and-boat.

Awake to the lapping of the Mississippi, ready for a day of boating, hopping a shuttle to Alton or Grafton for lunch, hanging at the Yacht Club or Riveria Too, or perhaps contemplating the world with a good book perched on the top deck lounge.

After a day of activities there’s nothing like Polestar Marina’s Bed-and-Boat. Relax with a cool one as the river shimmers in the Western sunset. The view is spectacular as boats cruise through the inlet to the marina to their slips.  Awake to the lapping of the Mississippi, ready for a day of boating, hopping a shuttle to Alton for lunch, hanging at the Yacht Club or Riveria Too, or perhaps contemplating the world with a good book perched on the top deck lounge. This is Glamping Polestar Style!

the short on
shug's shack 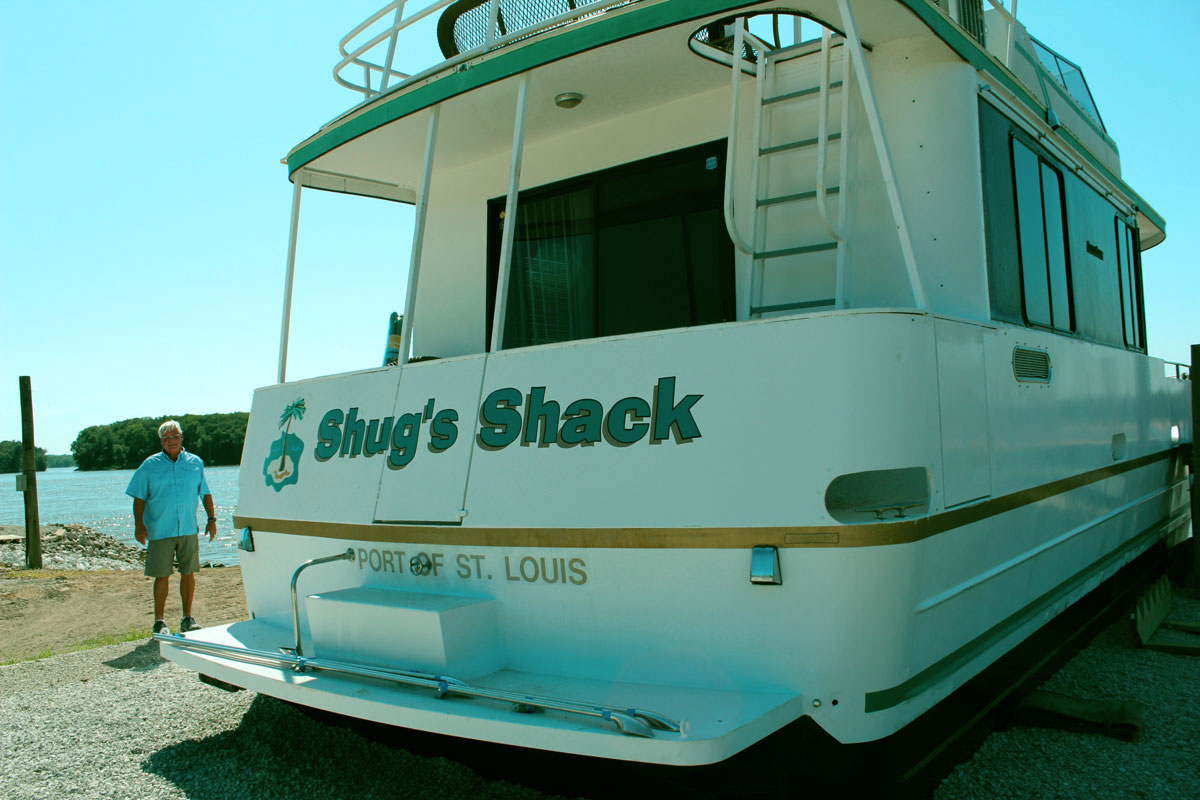 Once upon a time, a ferry impressive boat was cruising down the mighty Mississippi. The people in the boat were having a hull of a time. In a cruel twist of bait, a storm started to rage. The winds and rains didn’t just rock the boat—it was a much more serious oar-deal. They were out of control and in wave danger of crashing. Their demise was all but a shore thing!

With no other choice, they abandoned the rivercraft. After all, they were ship out of luck. It was a dam shame. Schooner or later they were rescued, but the boat remained on the shores of St. Charles—and it was one wreck of a mess.

The boat was forgotten since that baitful day when it crashed in St. Charles until some river enthusiasts came along and seas-ed the opportunity to transform the craft. They restored the vessel and, buoy, it’s knot too shabby. With lush bedsheets and robes, this boat became a true legasea to escape for weekend getaways (or waterver length of time!) on the Mississippi.

This Boat & Bed then became known as Shug’s Shack, where couples can come to take a rest and get their boat-y sleep after a day of boating on the Mississippi—a place to sail-abrate good times and have a ferry-tale glamping experience with a companion. The Boat & Bed at Polestar Boating Center anchor-ages you to ex-pier-ience the joys of this overnight stay, right here on the Mississippi.

We’re close to home for many, and closer to the city of Saint Louis for even more.

An Awesome Backdrop to Exchange Your Vows!

The Mighty Mississippi signifies the steady constant flow of your promises. It conveys the power of your love and commitment to each other and to the friends and family that will gather at the Polestar Bed and Boat to witness the beginning of a new life adventure. As the your ceremony draws to a conclusion and guests venture off to your reception, we will ready the hospitality that awaits the Newlyweds as they return for a 2 night stay at the Polestar Bed and Boat, all included!!

At the Bed and Boat, we will pamper you with comfort as you will take a breather from the hectic preparations that have finally…..come to rest 😊. After the last dance and joyful congratulations, what could be more fun than to snuggle up in the unique solitude and quaint surroundings of Polestar’s Bed and Boat. You absolutely deserve this time with your new first mate!

Think about it…A sunset ceremony overlooking the majestic river’s presence. It’s spontaneous, unique, unforgettable and the photos will be spectacular!

Interested? Drop us a line for complete details on hosting your wedding ceremony at Polestar Bed and Boat.

To book your stay or request more information, please contact us today!

Or, feel free to submit the form below and we’ll get back to you right away.